YouTube is an entertainment media site with an enormous customer base, mainly using for online marketing. It has tremendous popularity, and people love to visit it for various reasons. We can also say that viewers never get bored of watching YouTube. But have to every thought how astonishingly surprising it’s statistics can get. Yes! Here we will be focusing on some of the surprising statistics of over the popular website ‘YouTube.’

b.      The first-ever YouTube video features Jawed Karim, the co-founder of YouTube at the San Diego Zoo. The first video upload was on 23rd April 2005.

a.       In Georgia, Kazakhstan, Cambodia, and Algeria, YouTube is the most popular site.

c.       Out of all the videos watched across the device, YouTube accounts for two-thirds of the premium online videos.

d.      When brands use TrueView for the advertisement needs, they see views of previously existing content increased by 500% after posting new videos.

e.       Viewers those who go through the TrueView ads and don’t watch to completion are likely to share, subscribe, or view the brand channel.

f.        Viewers who watch advert videos more than 30 second or complete are 23 times more likely to subscribe, share, or visit the brand channel.

g.      Amongst the branded channel ‘Lego’ tops the list with 6 billion views.

k.      With every passage of years, YouTube channel earning more than 6 figure increases by 40% 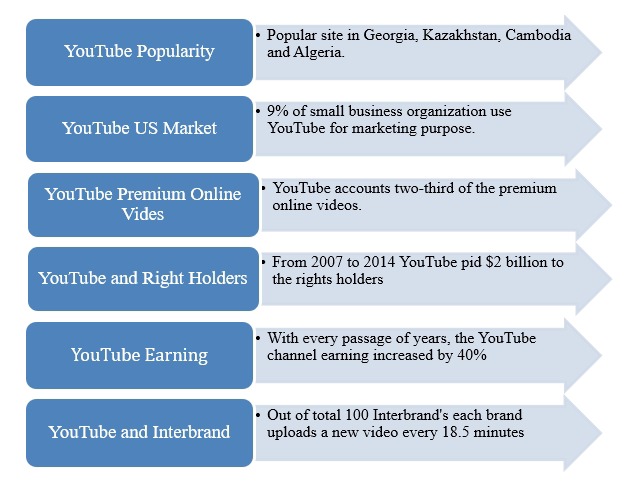 d.      Almost half of the video platform users, prefer to use YouTube to search on terms, they have never done before.

e.       After Google, YouTube is the second most visited site and the second largest search engine across the globe.

f.        YouTube is also the second most popular social media network around the world.

g.      On YouTube, users watch videos that stands more than the combination of Facebook and Netflix, that is 1 billion hours.

h.      Luis Fonsi and Daddy Yankee’s popular music video, ‘Despacito’ is the one with the highest number of views to date, which stands at 6.3 billion.

i.        As per the stats provided by Pew Research Center for the year 2019, Facebook is the second most used site after Google and YouTube are third on the list.

k.      On YouTube, the highest searched term is ‘Despacito,’ and the second-highest is, ‘BTS.’

l.        Around 81% of US parents prefer to search YouTube to find soothing contents for their kids.

n.      The first-ever video on this platform which hit 1 million views was an advertisement of Nike featured Ronaldo.

o.      In the year 2019 ‘T Series’ became the most subscribed YouTube channel. PewDiePie and 5 minutes craft are second and third, respectively.

p.      ‘Masha and The Bear – Recipe for disaster’ is a video on YouTube, which is not a music video with the highest number of views, 3 billion.

a.       As per the stats, by 2022 almost half of the users below age 32 will start preferring YouTube over live TV and will also not subscribe for the pay-tv services.

c.       On average, a user spends around 40 minutes on the YouTube video platform.

f.        When it comes to mobile services, YouTube watched by people within the age bracket of 18 to 49 than any of the Cable TV network or broadcast.

i.        One of five YouTube users believes that YouTube stays them updated with the events happening in the world.

j.        A user can navigate YouTube in 80 different languages, which cover around 95% of the total internet population. 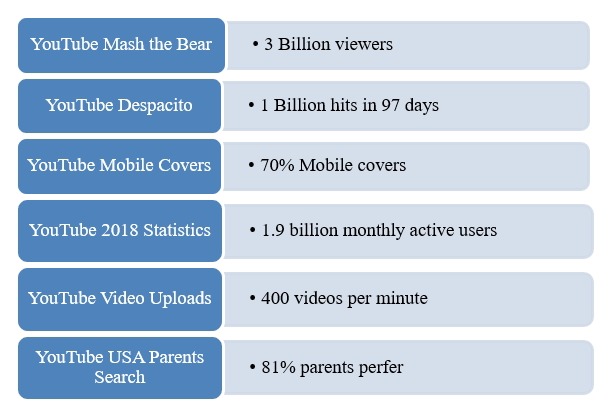 The above are some of the astonishing facts about YouTube, that indeed baffle you. These statistics are indeed surprising and, in the meantime, interesting. Anybody can upload almost everything on YouTube, which is free, and the platform offers an immense possibility for people making money. That is the beauty of the platform, and it truly justifies the statistics.

Netflix Statistics And Facts For 2019​