Pinterest is a powerful digital media, which can enable significant traffic to your website. The platform facilitates both word and image search. The idea conceptualized by Ben Silbermann and brought into a reality with his friends Paul Sciarra and Evan Sharp. They began to develop Pinterest in December 2009 and launched it in March 2010.

Pinterest became a trendsetter for fashion, photography, food, DIY, places, quotes beauty, home, recipe, art, and what doesn’t. It is such a creative medium for creative ideas.

Overview of Pinterest Statistics, Users, Demographics And Facts For 2020

Got an idea? Pin it. Need an idea? Search on Pinterest.

People began to see Pinterest as a search engine that gives the information they could rely on and trust. From Google it to pin it, the world has changed a bit. Pinterest keeps taking ideas from the users and makes it useful for millions of others.

The statistics taken from the time of its launch of Pinterest is impressive. Let’s go through some of the major statistics you should know about Pinterest.

The female-male ratio of Pinterest users shows that the former has more hold on the site. Both genders have different tastes in everything, even in the contents of Pinterest. But there are some areas where they show similar interests. The following statistics show how interests differ.

Content is the king, anywhere and everywhere. Good content never fails to attract the audience. When it comes to Pinterest, there is no other word or thing which dominates other than content. It is a place with lots of content and creative content developers that keeps influencing millions of people every day.

What makes this platform a favorite destination for fashion inspiration?

From among loads of shopping sites, why do people shop from this site?

Why do people take ideas from Pinterest to make use of their daily life?

To answer all these, take a look at the general statistics.

The following information will give you an idea about the reach of audience, marketers can make in Pinterest using adverts. 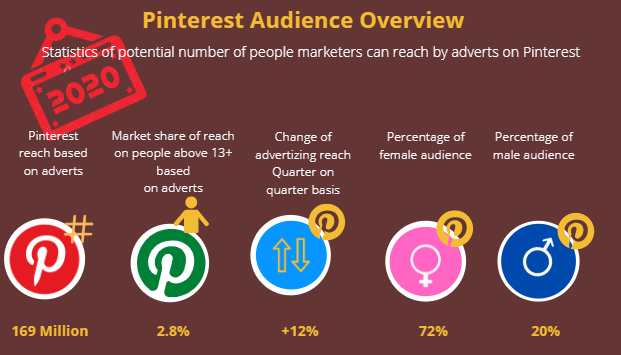 Pinterest is a site for those who are looking for variety in everything.

Even Though, the founders of Pinterest claim it to be not as social media, Pinterest is growing as one. The virtual media has got the content that could attract ordinary people as well as marketers and brands.

Pinterest began trading from the year 2019, exactly nine years from its launch. The platform has already started to contribute to the market share. Advertising gives the media a good profit. Apart from that, people use Pinterest for shopping as well.

With its impressive and stand out proposals in each category, Pinterest is growing. 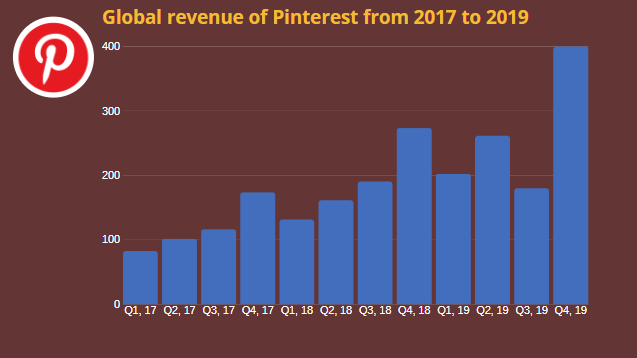 Pinterest is a popular visual treat platform intending to give and take ideas from people. Pinterest has two types of audiences; influencers and the influenced. The profound ideas generated by the ingenious minds spread all over to create an impact on the daily lives of millions.

The demographics here show the number of people from various strata of society and community got influenced and gave recognition and rise to the platform. The growth of the platform is evident from the immense increase of its users since the launch.

Get Ideas, Pin It

Do the statistics of Pinterest express much better results in the future?

Like any other startups, Pinterest started as an infant who is looking for a platform for its growth. With only 5,000 users initially to 320 million active users weekly, Pinterest has shown a significant outbreak on social platforms.

The aggregate statistics on Pinterest shows its broad reach on people within 9 years. To be a pinner, you need to create alluring content and should have unique ideas. Your pins speak through images, and many such catchy images show good results.

The overall statistics of Pinterest shows the engagement of the medium by global users. The visual treat of Pinterest never fails to impress anyone who is looking for creativity or new ideas. It is a more colorful space that gives you brilliant ideas and to share your thoughts with the world in the form of pictures.