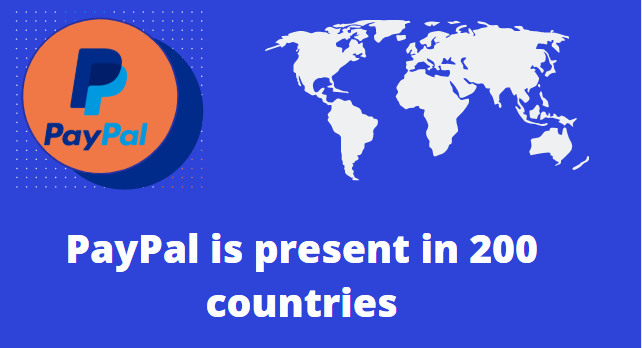 In 1998, Max Levchin, Russel Simmons, Luke Nosek, Yu Pan, Peter Thiel, and Ken Howery founded Confinity as a security software development company. PayPal started as an inter-division company within Confinity in 1999 for a money transfer service. In the year 2000, it merged with Elon Musk’s X.com and re-christened as PayPal in 2001.

Overview of PayPal Statistics, Usuage, Users. revenue And Facts For 2021

In February 2002, PayPal went public on Nasdaq exchange under the trading symbol PYPL by listing 5.4 million shares @$13.00 per share for a total of $70.2 million. However, the San Jose, California headquartered company’s public status had short-lived as it merged with eBay in July 2002.  The acquisition became effective on October 3, 2002, and subsequently delisted from the stock market. E-Bay purchased the entire share of PayPal for $1.5 billion. (Benzinga)

The following are the summarized statistical information of PayPal.  Before moving forward, the given information will work as a vital tool to have a comprehensive understanding of PayPal, its revenue, demographics, and transaction details.

Looking at the history of PayPal, we can find acquisitions and merges are part of its business strategy. Ever since storming to the stock market with public share offers, the euphoria short-lived when they decided to merge with eBay and got separated from eBay in 2015. And after that, they maintained an aggressive acquisition strategy. They acquired most of its potential competitors before it is too late and improved its business potentials. 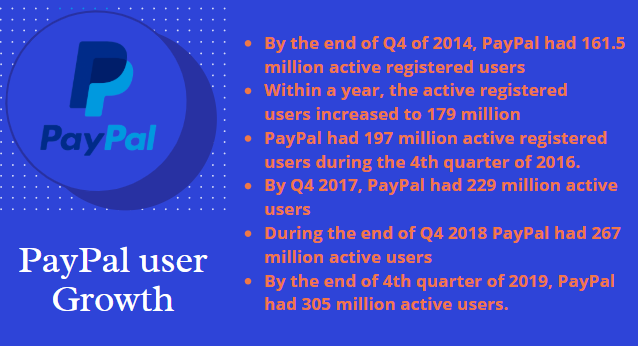 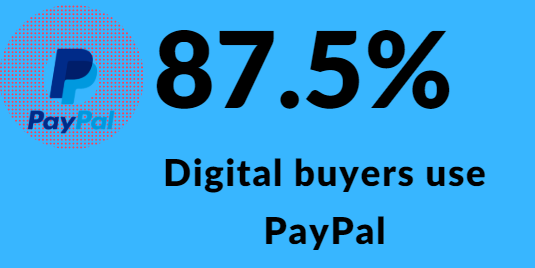 PayPal offers multiple payment options depending on your requirements. The options include PayPal Cash, PayPal Cash Plus account balance, PayPal Credit, PayPal credit or debit cards and rewards, etc. You can set the preferred choice for making payments, and if you do not have preferred payment options, then also it is not an issue to make the payment. The account is simple to use, no need to punch the large card numbers. The following are some of the vital transaction/payment statistics of PayPal.

In the following, the statistics illustrate the annual revenue of PayPal from 2012 to 2019. In 2019, PayPal’s combined revenue touched $17.77 billion from $15.45 of the previous year. The significant parts of the incomes are from transaction revenues and value-added service charges. The split of revenue for the year 2019 was $16.1 billion and 1.67 billion, respectively, for transaction revenues and value-added service charges. 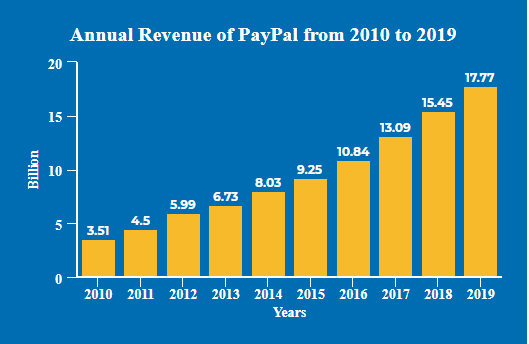 PayPal has dominated the online payments market for years. With the advent of other digital wallets such as Apple Pay, Amazon Pay, and Google Pay, it is facing the heat of competition in the digital money transaction market. PayPal already started capitalizing on foreign markets a few years ago. However, how it plans to compete with local successful digital payments in those markets is crucial to the growth and sustenance of the company. The company has tremendous growth opportunities in the Asia-Pacific and Latin American regions. Its investments and partnerships with GoPay, Union Pay, and MercadoLibre would effectively help the company maintain its global dominance in the digital payment world.