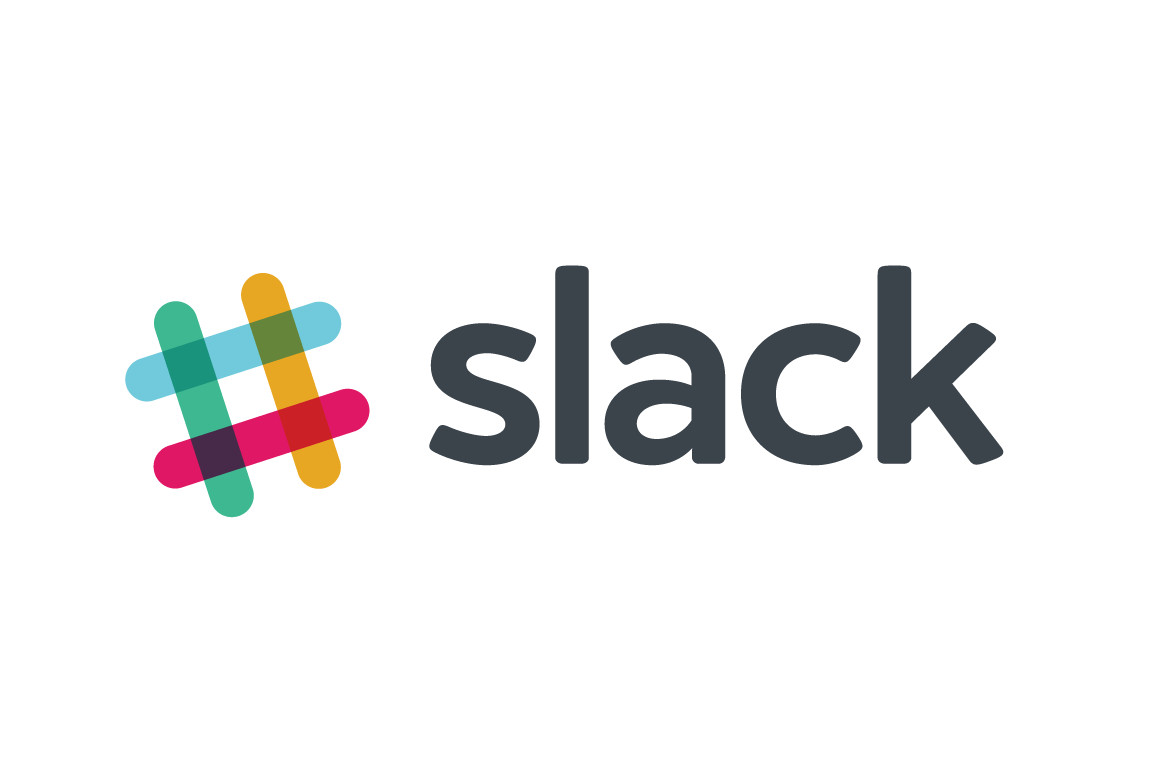 We have seen many online collaboration apps contribute to the overall growth of the business by easing up team communication in different ways. Some disappear so quickly, but some continue to dominate the market. Slack, the acronym for Searchable Log of All Conversation and Knowledge, is such a collaborative team communication app with exemptional functional qualities. It started as an internal tool for Tiny Speck during the development of the online game, Glitch.

Established in August 2013, it offers a bundle of features and continuous chat rooms under various topics and allows partners to exchange messages, contents, pics, conversations, files, emojis, etc. In the beginning period, Slack has been using like an organizational platform; however, presently, it is also active as a community platform. Slack designed to replace email and improve the efficiency of communication between a group and colleagues.

Using a specific URL or by invitation, a new member can join the team of a workspace.  It eases up communication within the group without texting or emailing, and the discussion will be visible to all members of the group if the conversation is via a public channel. Similarly, members can communicate through private channels, allowing senders to transmit direct messages to specific users, instead of a group of people.

It may look like an instant messaging app and collaboration solution. But it has more features than any other messenger apps offer.  One of the outstanding solutions is its integration features, and it supports many third-party services such as Heroku, IBM Bluemix, Google Drive, Dropbox, Zendesk, GitHub, Runscope, Box, Trello, Zapier, and Crashlytics. With its integration features, you can centralize all the notifications into a single searchable window, helping to make quick decisions.( https://en.wikipedia.org/wiki/Slack_(software))

In the following information, you can read some of the most interesting statistics of Slack. The team messaging app Slack is a relatively new product in the market, but it could make its impact within a short period.  As per the industrial forecast, it will continue to grow and can contribute much to its enterprise group collaboration and messaging.

What types of companies are using Slack? (enlyft)

Most of the Computer Software companies are using Slack. However, the significant user patterns are Computer Software 18%; IT section 7%, Marketing, and Advertising 5%.  On a general pattern, companies with a staff strength of 10 to 50 and having a revenue of $10 million use Slack. 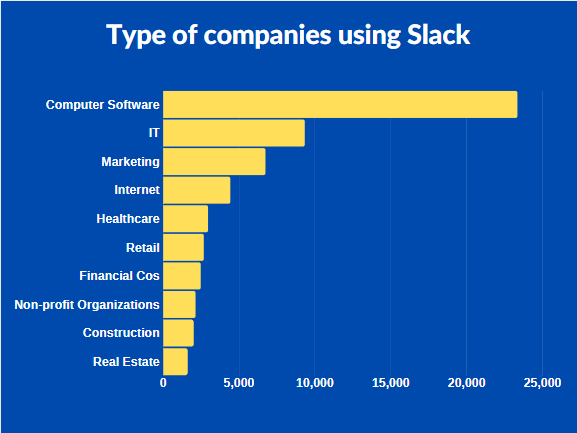 The industry-wise usages of Slack are as follows: (enlyft)

The following are the top 10 competitors of Slack based on their revenue size and funding. (Owler)

Even though Slack is not yet in the profit mode, it was successful in keeping its presence live in the collaborative team communication app fraternity. The aim of the company to stay as an alternative source for effective communication between colleagues and team members by replacing email has received immense acceptability in the market. It is evident from the facts that it could increase its daily users to 12 million. Also, another promising note about Slack is that many companies started using the communication platform, and more than 50% of the fortune 100 companies have already subscribed to it. 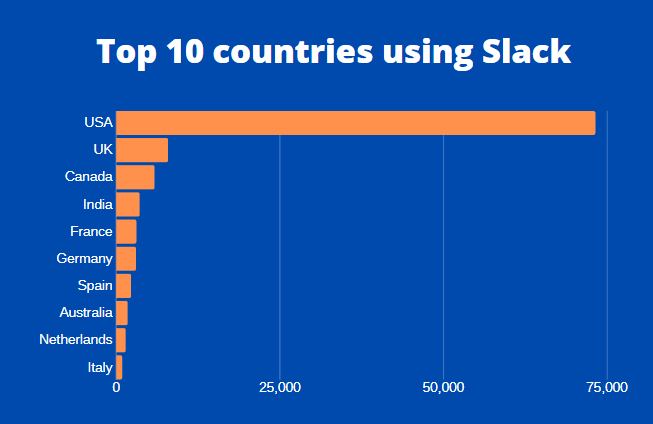 The primary source of Slack’s income is from the subscription.  Slack subscribe to large organizations, and it offers monthly, annual, and enterprise grid subscriptions to the customers. Apart from this, it provides free basic service. The enterprise grid rate will be provided separately.

By using state of the art information technology, it offers team message/communication solutions by using cloud-based, flexible, and intuitive tools.  As a result, companies can achieve increase productivity, quick communication among the group, and help to meet the targets.  It has grown beyond a mere chat room service and can integrate into many digital services.

The platform offers an efficient and enjoyable working experience, as it constantly upgrades the technology for communication. Therefore, people and corporate clients find it is a convenient mode of communication tool, enabling them to get connected, exchange views among the group, and thus helps to make quick decisions.

Barging into the NYSC with a stock symbol WORK, Slack’s market cap stands at $19 billion, which is almost the double of 1918, many consider as an inflated situation.  But the valuation is justifiable considering the $400 million revenue for the year 2019.  In the following, we will have a comparative analysis of Slack with its next competitors, Zoom and Twilio. The two communication platform players offer video communication and cloud communications. We will also have some comparison study with Microsoft’s Teams application, which is offering along with Office 365 as a bundled feature.

The revenue growth of Slack is higher than Twilio and below to Zoom. (Forbes)

Slack enjoys a better gross margin comparing to its next competitors, which directly attributes to its low hosting costs.  By and large, customers use Slack for transmitting text and images. However, Slack continues to register significant loss, which is higher than its peers.  Slack is struggling against Microsoft’s Teams, which is a relatively new entrant in the online collaboration market.

Slack and its evolution: (Hostsorter)

Some of the facts are very much interesting as well as surprising to you.  Go through the evolution of Slacks and its key functions.

It has been widely using by many corporate organizations for streamlining communication within the group as it makes file sharing and texting simple and easy. It would be interesting to read below the growth of the company ever since its inception.

Despite Slack shows, a robust growth ever since its inception, the present state of the company is not promising. Contrary to the growth, we could see for the year 2019, which shows 82% revenue growth, Slacks growth in 2018 was 110%.  Looking at the 2020 revenue growth, it shows only 67% growth, whereas it was 89% during the first month of 2018.  Apart from the operational loss, part of the loss attributed to the service disruption compensation. The rapid growth of MS Teams also put stiff challenges for Slack. But Slack has been managing the show with the help of a highly efficient user interface.  However, the competition is fierce, and Slack has to converge all its energy to fight the mighty MS Teams.